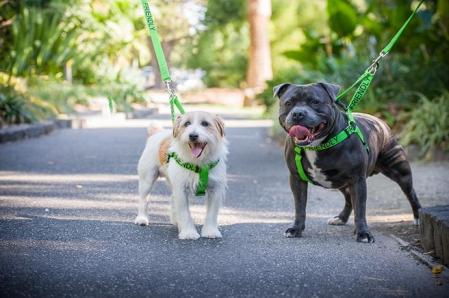 In the equine world, most riders know that a horse with a red bow on its tail is a kicking horse. The color is a warning to maintain safety in humans, other animals and so that the horse that carries it is not disturbed, and therefore can be calm.

A similar warning color code has been carried over to the canine world . With this system we try to "educate" the public about the needs and personalities of each dog. An idea that started with a yellow bow tied to the leash, collar or neck of the dog, now it has a wide range of colors, collars and garments.

Giving the colors meaning is intended to create a clear and universal signal that warns strangers about the behavior of the animal with its environment, people and other dogs. In this way , conflict situations unwanted by both parties would be avoided .

This non-profit organization was born on September 13, 2012 and was created with the intention of educating people about the need to ask their owners before approaching to pet a dog , and before allowing children and other dogs come closer. In just under five years, the project has reached more than 40 countries in which it seeks to educate on the best way to approach dogs.

Through a yellow bow tied to the dog's leash or collar, The Yellow Dog Project tries to make other people aware of the space needs that a dog may have because it is being trained, because it is recovering from surgery or medical treatment, because he is a very nervous dog, because he is in heat or because he may not be too friendly with strangers.

“They are the dogs that need space. They are not aggressive, but dogs that have problems of fear, pain, they are rescue or shelter dogs that have not yet had enough training or command of obedience; they are training for work or are on duty, ”they explain.

In addition, the organization clarifies that the use of the yellow identification does not imply, in any case, that the owner of the dog must ignore the training that his dog needs . Nor is it a confession of guilt, nor is it a reason to be ashamed of the dog.

In addition to this project, the Friendly Dog Collars company proposes to add more colors to the equation and sells accessories such as collars, leashes and harnesses that specify with colors and words what the dog's attitude is.

Its founder is Jon Saville, a man who took the prejudices of people when he walked with his dog, a Staffordshire Bull Terrier -a breed considered potentially dangerous-. Thus he decided to develop these accessories and his proposal has become fashionable among animal owners around the world as he makes an effort to raise awareness among the population of dog lovers .

This color code or its “simple traffic light system” tries to give your dog a voice because even though they don't have it “they need others to know their personality ”. Thus, they explain , "they will get to have more relaxed passes." These are the meanings of the different colors:

- Red: caution, it means that we should not approach these dogs.

- Orange: no dogs, it means that the dog does not get along with other dogs.

- Yellow: has two meanings. The first is nervous, which implies that the dog can be unpredictable. And the second " adopt me ", which means that the dog is looking for a new home.

- Green: friendly, there is a free way for dogs and people to approach this dog.

- Blue: again two meanings, although very similar. In training or on duty, these dogs should not be disturbed.

- White: blind dog or deaf dog, the dog has a disability.

- Purple: do not feed this dog.

As with The Yellow Dog Project, the use of these collars does not exempt the dog owner from giving him the education he needs to overcome possible problems he may have.